It seemed to me to be a carefully rehearsed and well scripted Advertising/PR campaign !

Don't get me wrong though, I watched most episodes and I quite enjoyed it. And I certainly felt like I got to know the four couples. But was it a DIY "Reality" show ? ... I'm not so sure. 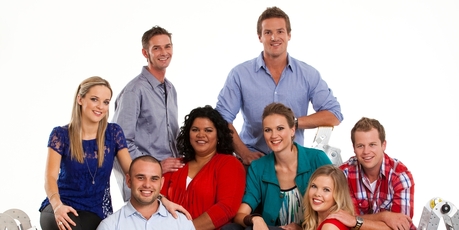 Perhaps I'm being cynical but I had the feeling that much of it was set up and the contestants were "prompted" on what to do (or say) much of the time. For example, the episode when one couple voted strategically (by giving all of the other contestants a score of 1 out of 10) in order to win a challenge. All the other couples made it look like it was a huge deal and they'd never speak to them again, accused them of cheating etc ...  and then 2 episodes later they are all friendly again !  Was all of this scripted just to make it interesting ?

From early on I had my doubts. The houses they used has been purposely trashed - graffiti, holes in roofs and walls, broken toilets, rubbish everywhere. They were made to look like they had been abandoned for months/years when in fact they were perfectly ok and had in fact been lived in up until a few weeks before filming started.

Never the less as the series went on we got to know the four couples and it was interesting viewing, if a bit long winded and sponsor heavy ... and for the most part I thought quite entertaining. But in the back of my mind was always the thought that it all felt very contrived. Perhaps that was the intention, but they insisted on making out that it was "real people" doing up some houses and competing against each other for the "major prize" at the end. In my opinion it was TV and Sponsor driven entertainment with just a dash of DIY.

And so to the finale, a 2 hour episode which culminated in the live auction of the four properties. Most of the show was in fact a summary of the rest of the series, with the auction tacked on the end. All four houses sold under the hammer and rather surprisingly the range of prices was huge ( $798,000 to $961,000 ). Four sites right next to each other, same size section, similar size (& type) of  house, and more or less the same specs. Assuming the auction was totally legitimate it seemed that one buyer in particular may have got caught up in the hype of the whole thing and spent way too much on a house which had a reserve $157,000 under what they paid.

With a little less "faffing" about and a bit more legitimate DIY renovation this could have been a brilliant show, perhaps even good "reality TV" but I think it missed the mark. Then again there has been a lot of public interest and no doubt attracted a large TV viewing audience, which is certainly what the sponsors wanted .... So maybe I'm wrong ?